For anyone into fitness training, bodyweight exercises are essential. Yes, it may feel great to bench rep your max or try out the latest piece of equipment at the gym, but learning how to train using just your own body has an enormous range of benefits. The first is the most obvious: you don’t need any equipment. That means that you always have a way to train whether there’s a ten-deep queue for the free weights at the gym or you’re in a hotel room miles away from the nearest dumbbell. Secondly, bodyweight training is extremely functional. If you’re performing a movement using your own body you’re generally carrying it out in a way that helps to develop how it works as a whole unit. By that, we mean things like balance, symmetry and proprioception. All things that will help you carry out functional tasks, from carrying the shopping to running a marathon.

As we’ve mentioned many times, squats are one of the most important exercises to add to your training plan. They work a wide range of muscles, including the largest in the body, and they’re at the top of the pile when it comes to functional movements. The jump squat is a progression of the squat which modifies it in a number of ways. By adding the jump element to the exercise you start to train your explosive power – something that’s beneficial to sports where you need quick bursts of speed. It also means you’re pushing your cardio fitness harder, which is why the exercise is so popular in HIIT classes.

From a standing position with your feet hip-width apart. Lower into a squat with your back straight and your thighs almost parallel to the ground. From there, push against the ground and jump into the air aiming to gain enough height to be completely vertical off the ground. As you land, keep the knees slightly bent and then lower back into the squat position with a controlled motion. Once lowered, repeat the movement. Ensure that the landing and lowering of the exercise feels comfortable with minimal impact on the heels or knees.

Muscles worked: Most across the body with key areas being the core, shoulders, arms, and glutes

To the casual non-fitness observer, the bear walk is basically walking across the floor on all fours. Essentially it is, but this simple movement works an enormous range of muscles across the body and offers a number of functional benefits to any workout.

Start in a plank position with both hands directly underneath the shoulders. Move your knees forward so they come slightly off the floor and the thighs are perpendicular to the body. Step forward with one knee and move the alternate arm forward at the same time. Continue for however many steps space will allow then repeat the same format backward. 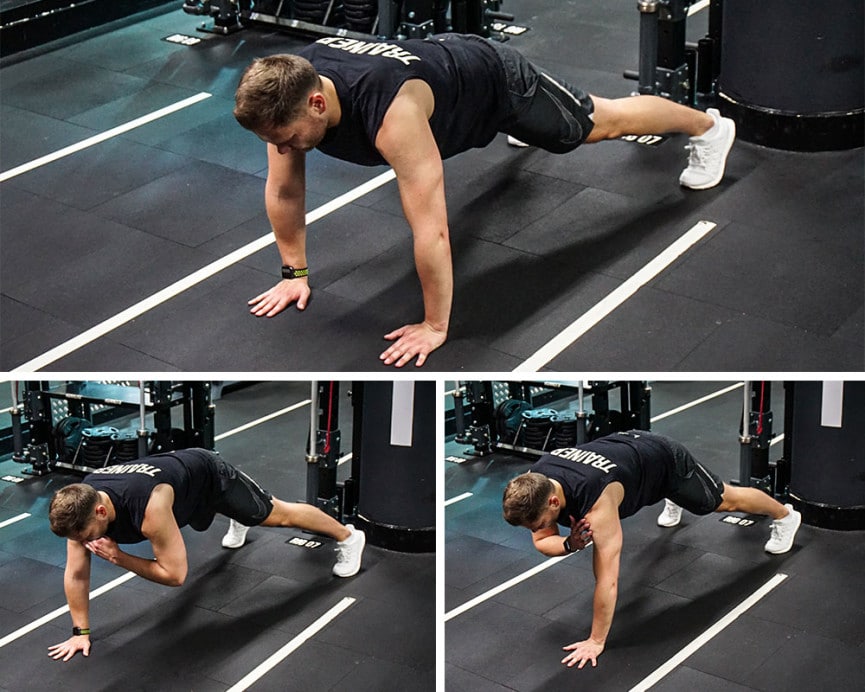 When it comes to core exercises the humble plank is hard to beat. However, if you’re taking things up a notch then there are a number of variations to make the movement more demanding. Adding shoulder taps to the plank means that you’re not only incorporating the arms into it more, but the lack of stable positioning means you have to work your core at a higher level.

From the plank position, lift up one hand across the front of the body and tap the opposite shoulder. Lower that hand and repeat the movement with the alternate hand. Be sure to maintain a tight core throughout the exercise as the main workload comes from the stability core muscles holding the body in place. If you start wobbling left and right you’re no longer working the core effectively. 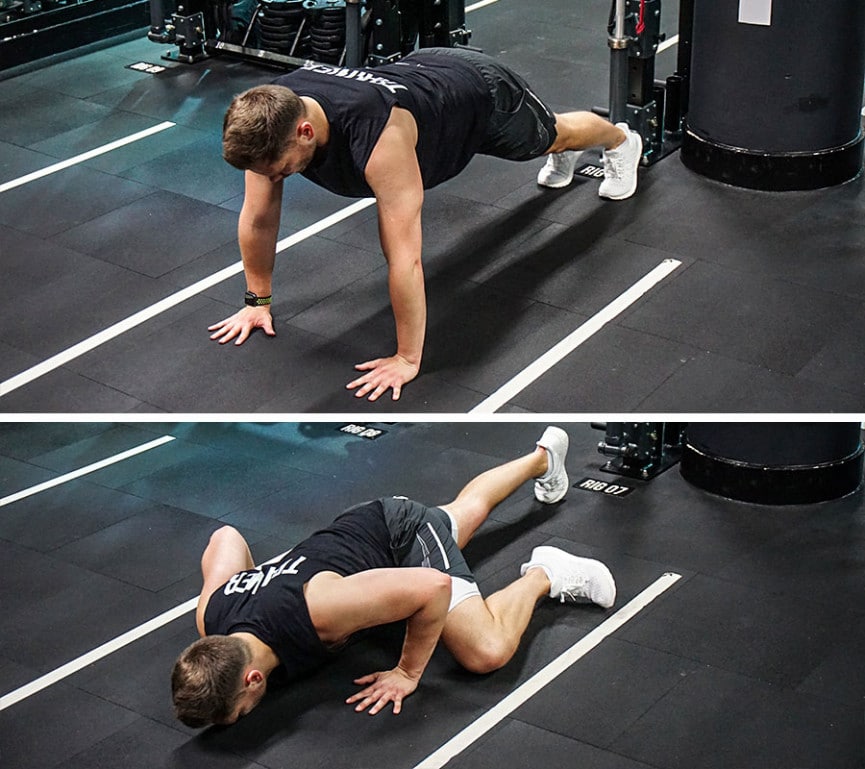 Remember when Spiderman sued to climb along the floor in the old 1980s show and they filmed it like he was walking up a wall? Well, this is named after that movement. As exercises go, it veers towards the more advanced end of the bodyweight spectrum taking a normal push up and introducing a tricky core element.

From a plank position, lift one leg off the ground and pull the knee up toward the body. At the same time lift the leg outwards so it’s raised alongside the body instead of underneath, then lower the arms into a push-up position. From there, push yourself back up and move the foot back into that initial plank position. Repeat with consistent, fluid motion. 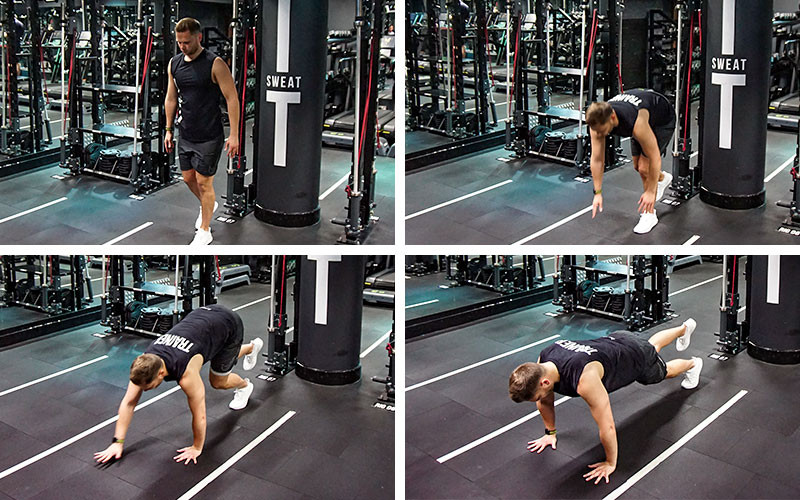 Often used as part of a dynamic warm-up routine, the walkout is a great exercise that combines some strength training with an element of mobility. Here we’ve covered the one-legged variant to add an extra challenge for both the upper body and core.

From a standing position, lift one leg off the ground and lean forward to place your hands on the floor. Try to keep your standing leg as straight as possible during the movement to ensure the hamstring is stretched and walk your hands forward until you’re in a one-legged plank position. From there, step the hands backward and push yourself back up into standing. Perform four or five reps on one leg before switching over to maintain the momentum.

An incredibly simple movement but one that’s often overlooked in beginner workouts, the V-sit is an excellent core exercise that, due to the positioning of the body, works a wider range of muscles than a standard floor to knee sit up. The fact that you have to maintain a position raised from the floor makes for a more challenging exercise.

Sit on the floor and raise your shoulders and legs off the ground. Try to keep your head in a neutral position with the spine and pull your thighs and torso together. Move back to the starting position and repeat. To maximize the exercise, carry it out in a slow and controlled movement, taking two or three seconds to lower the body to the starting position.